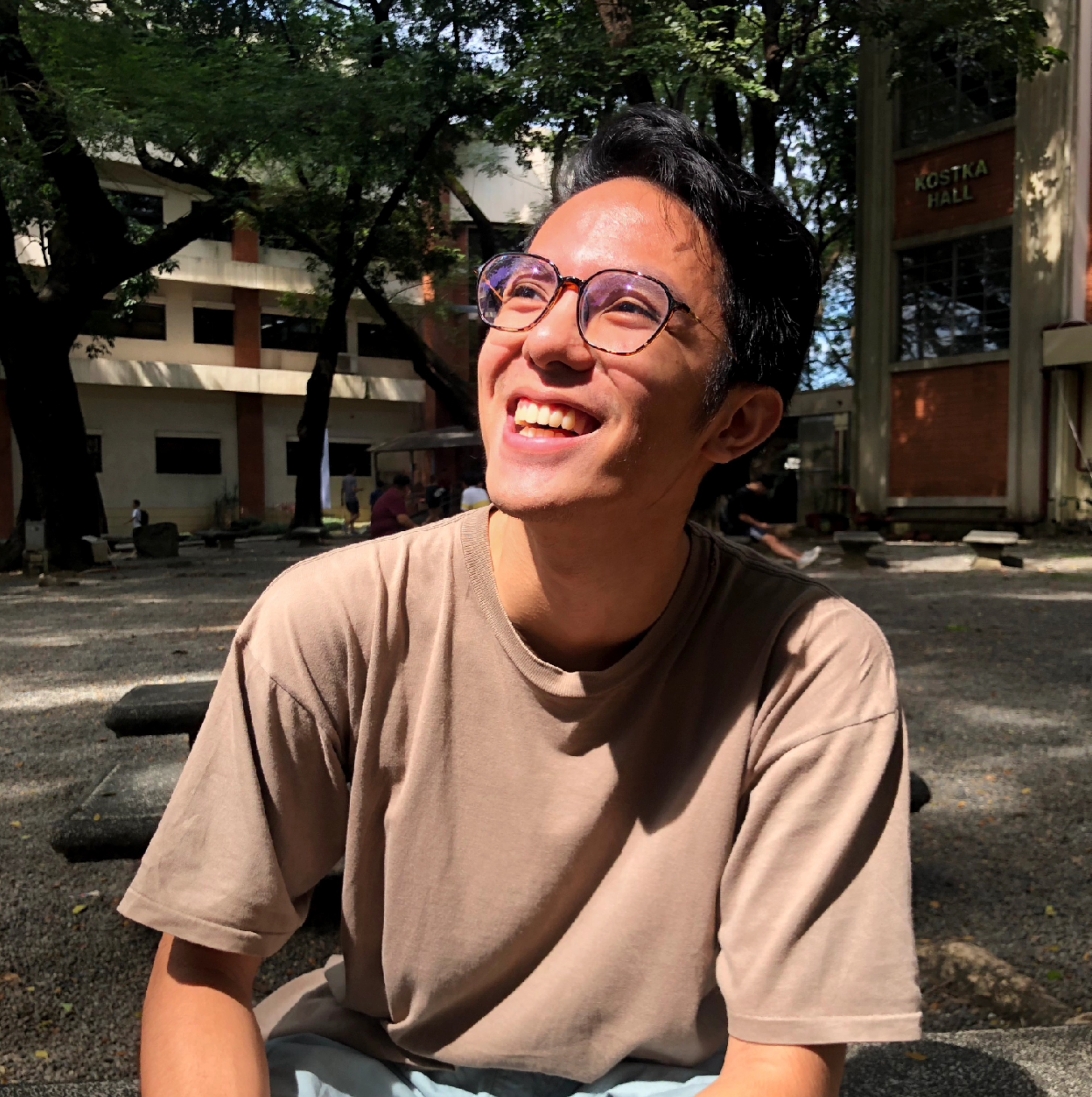 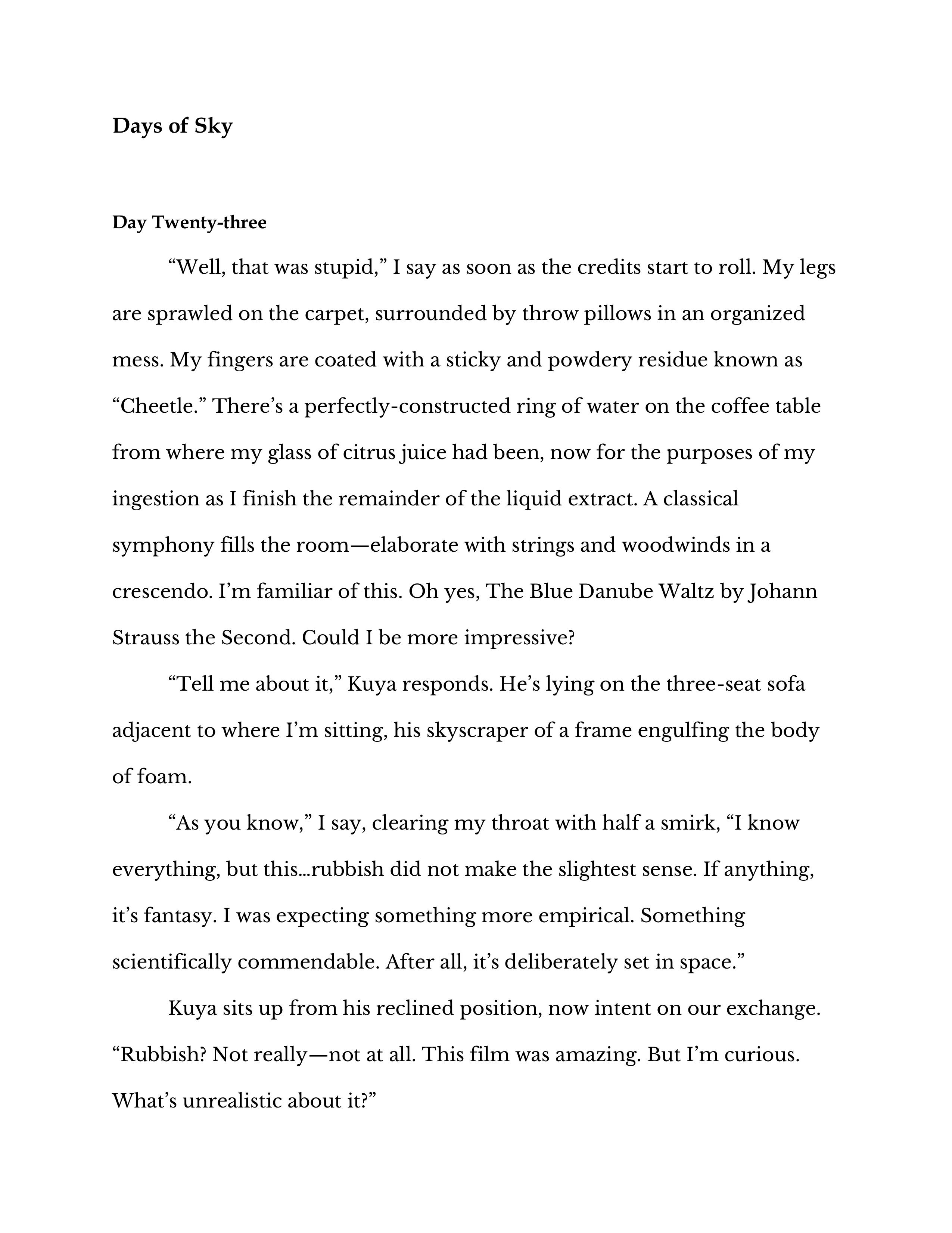 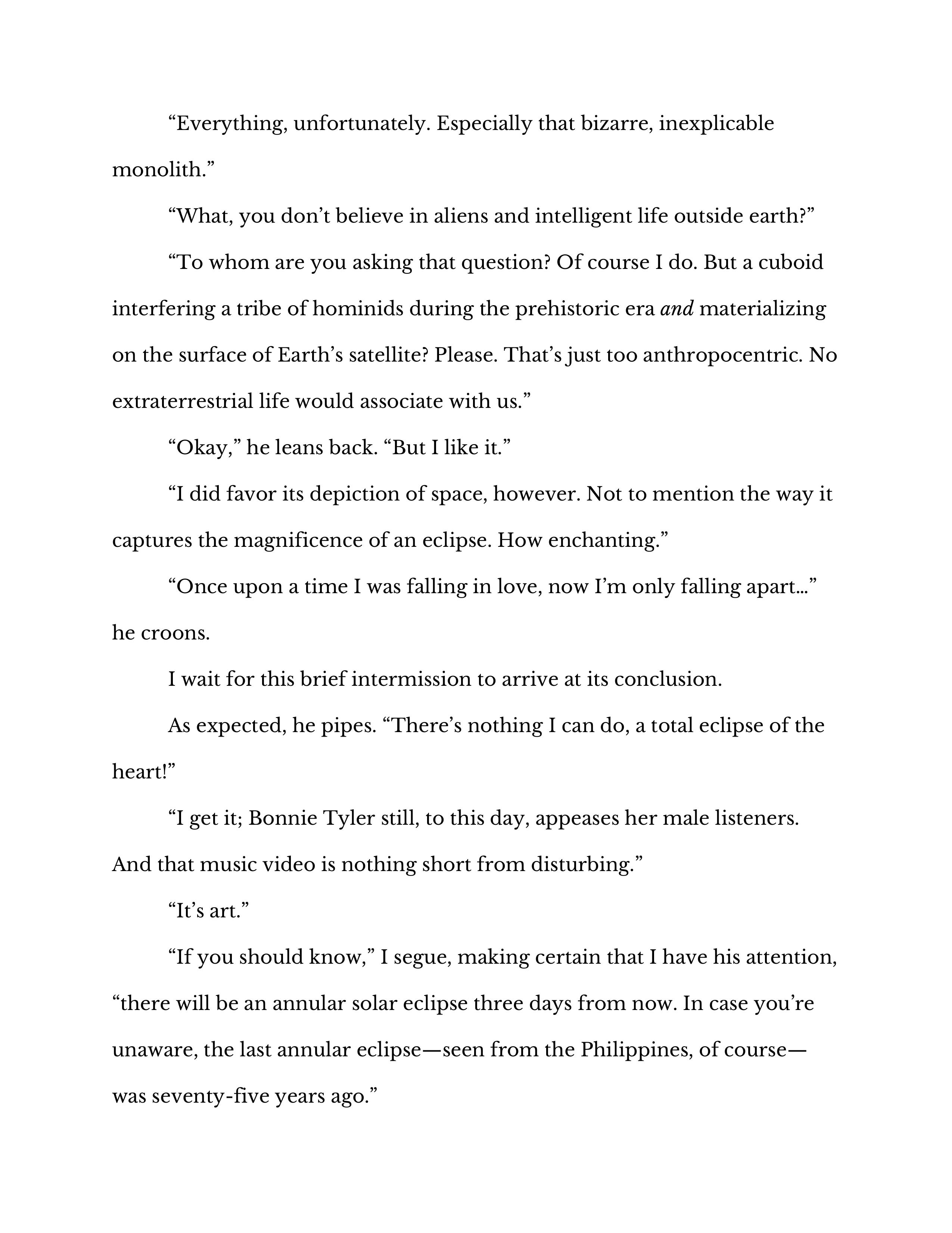 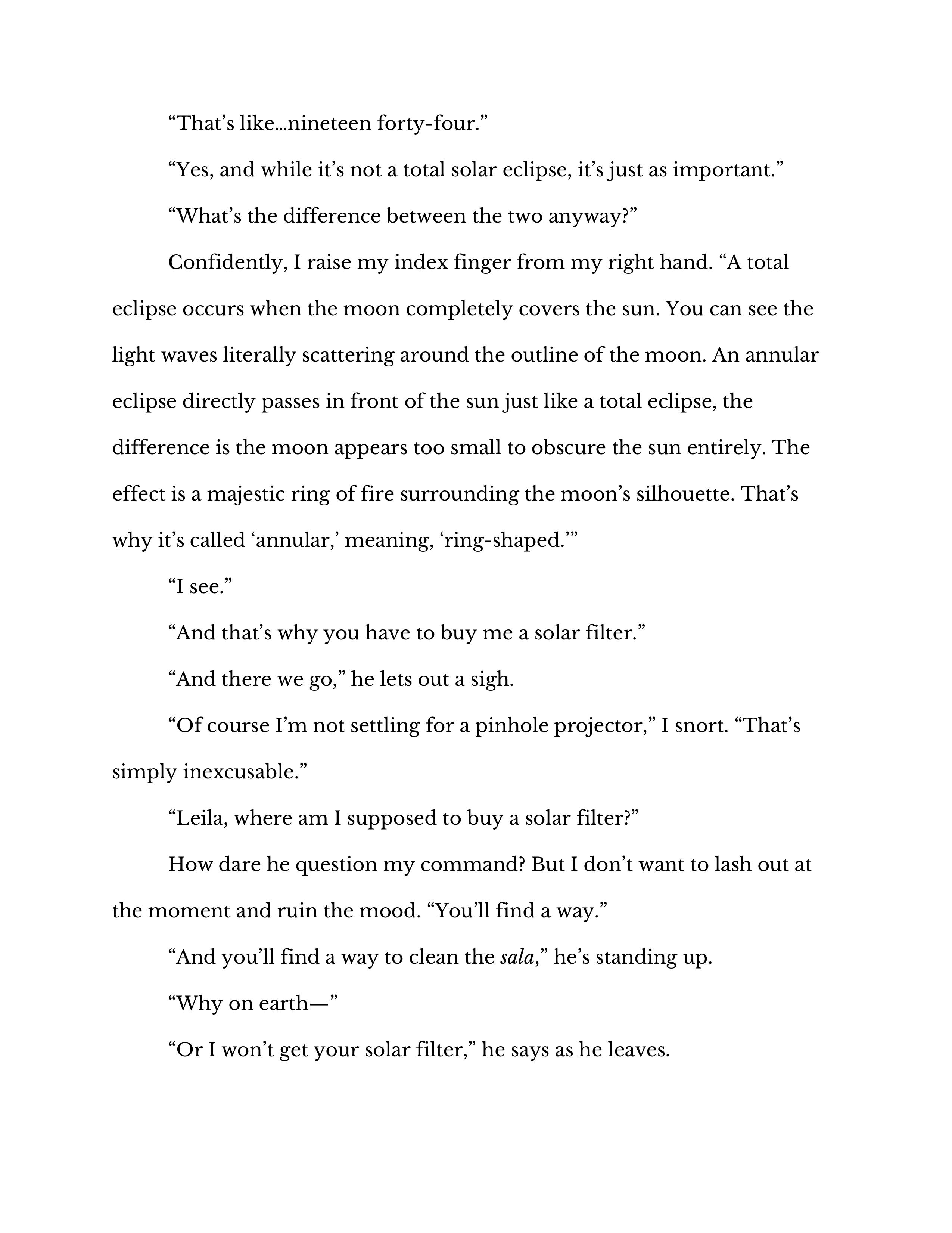 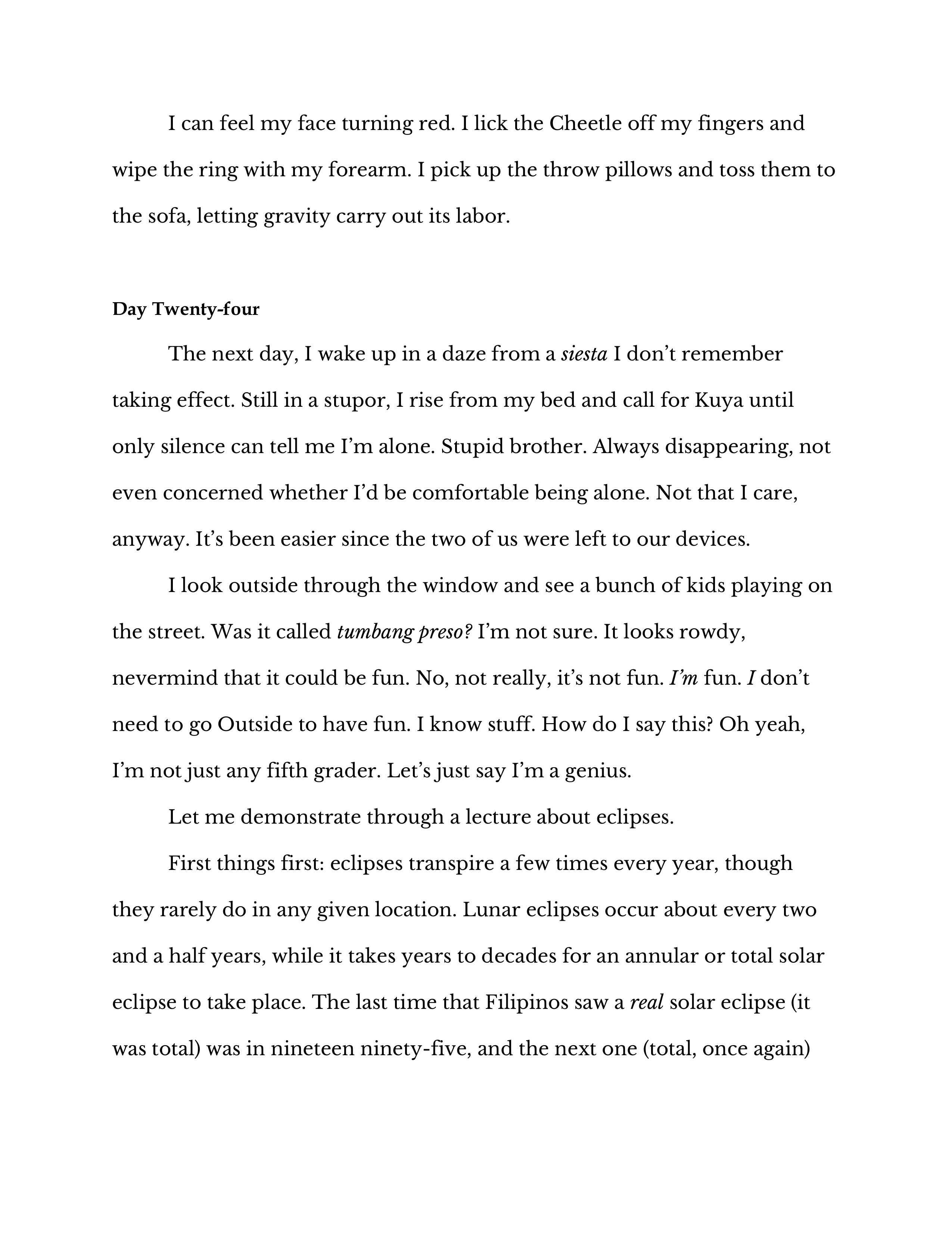 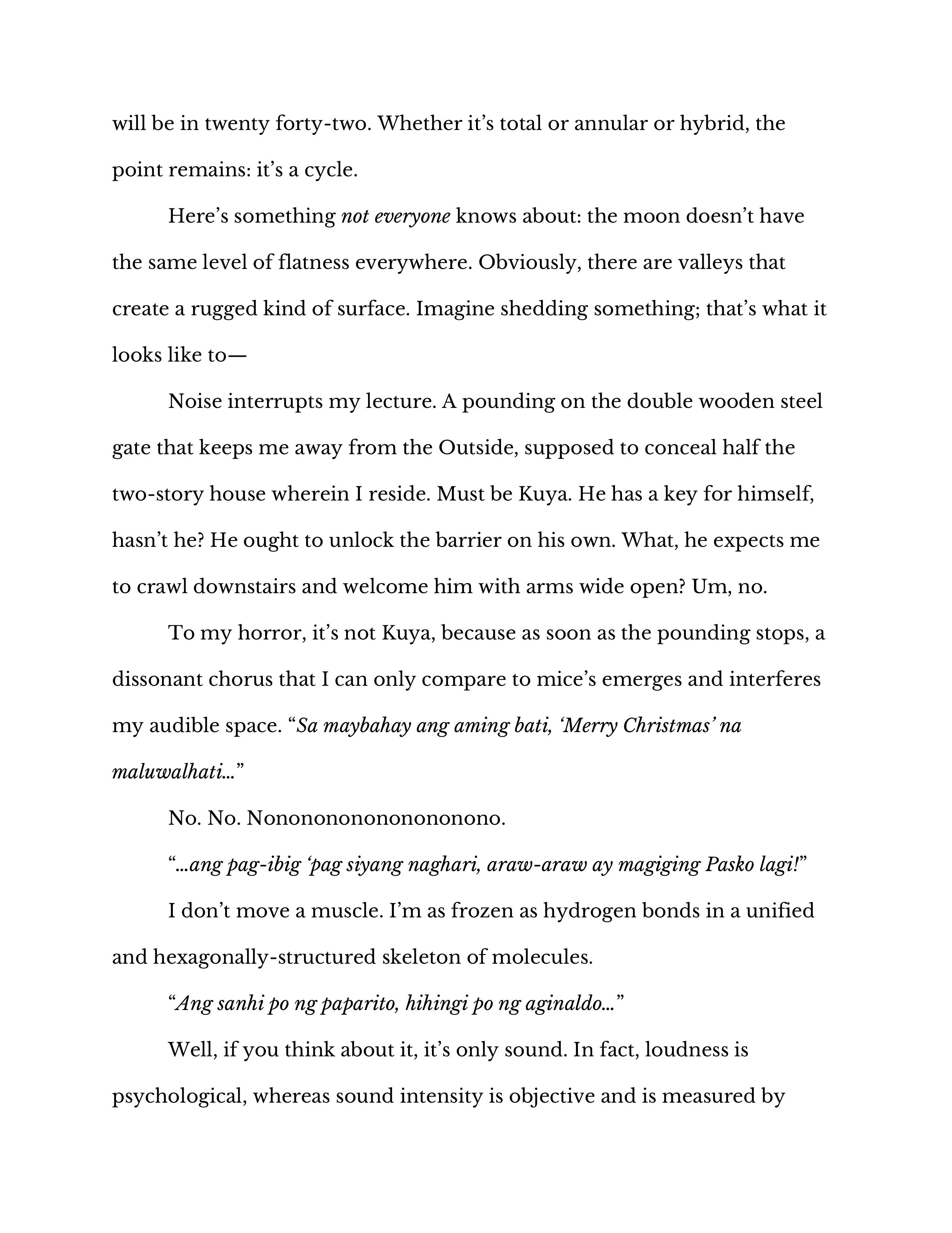 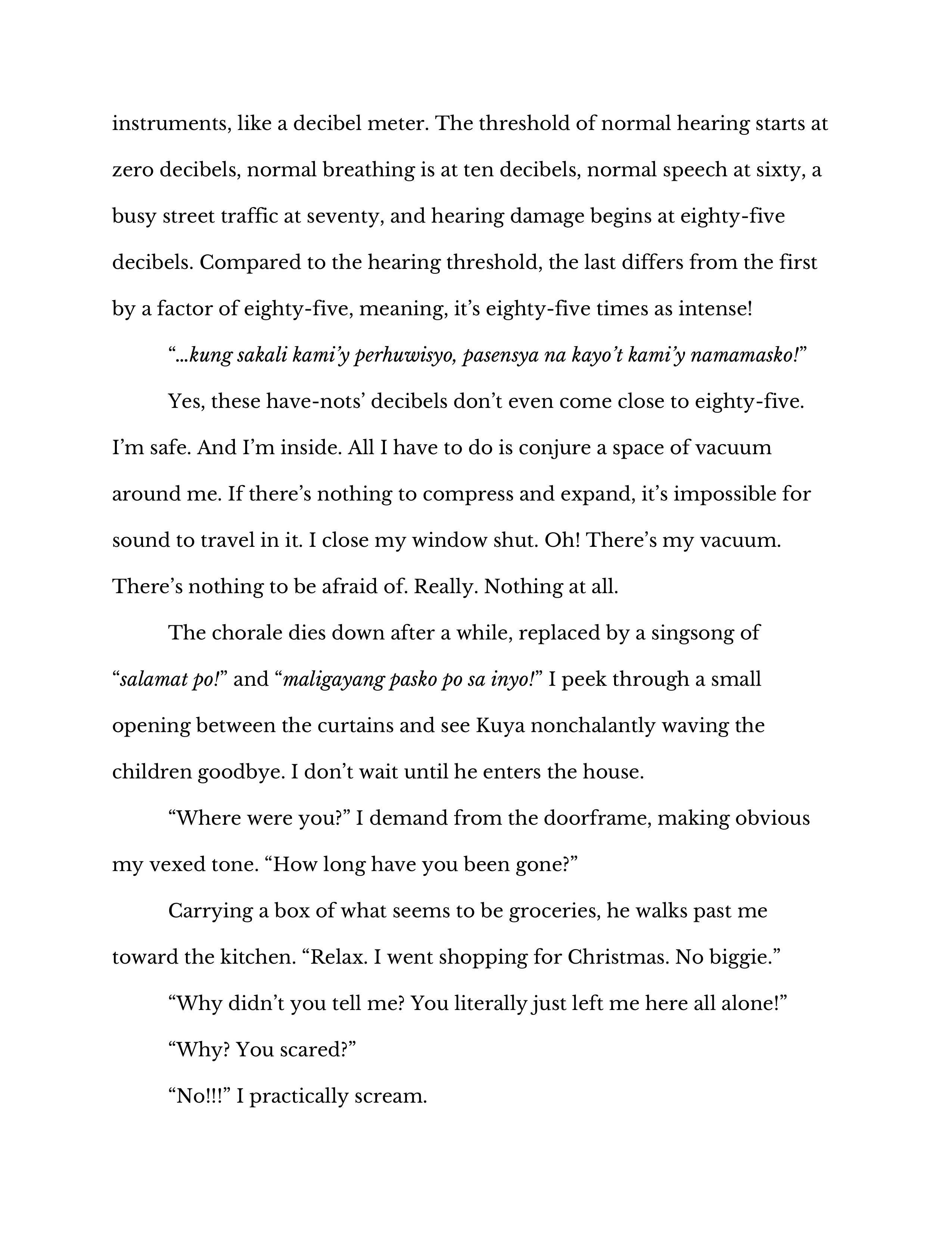 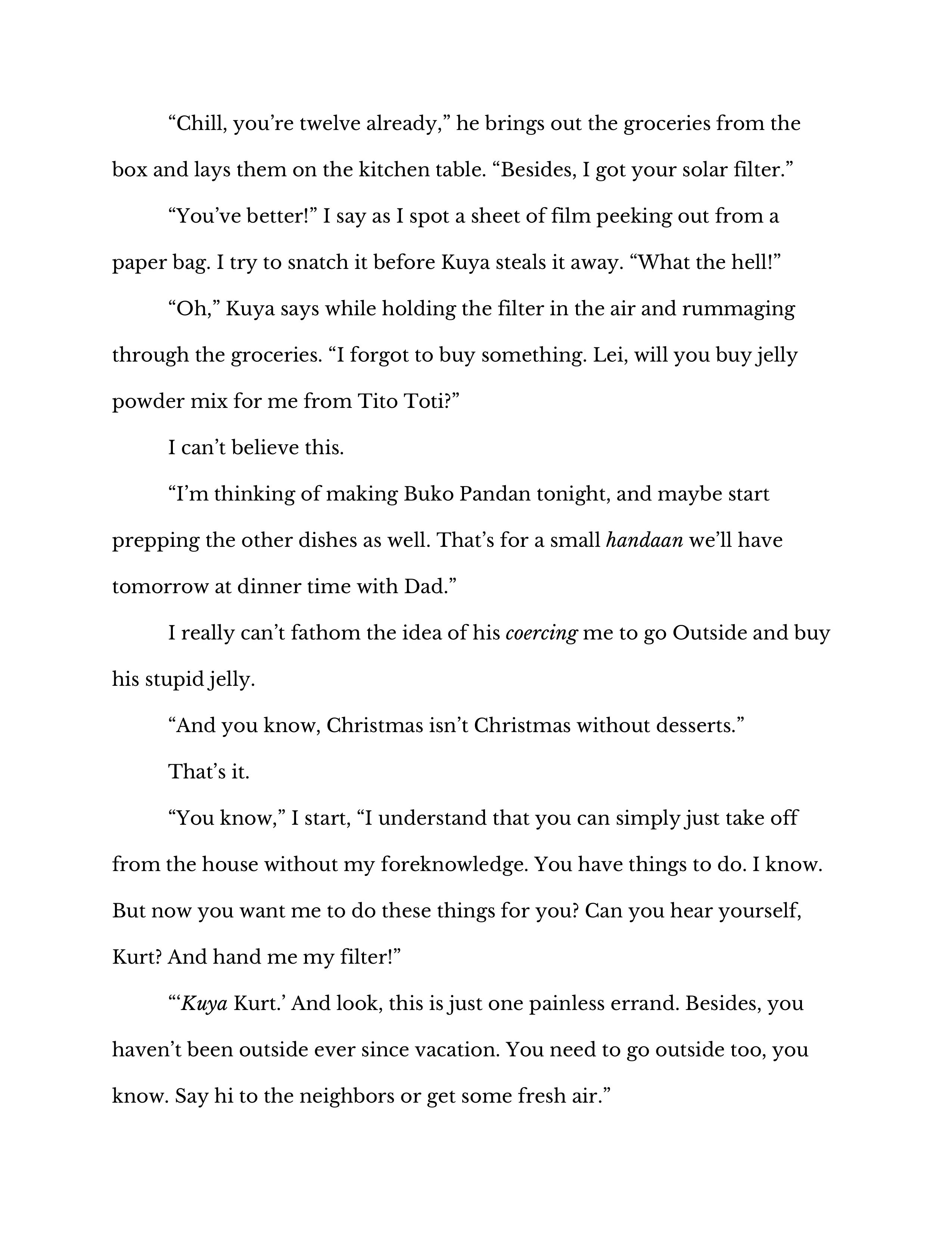 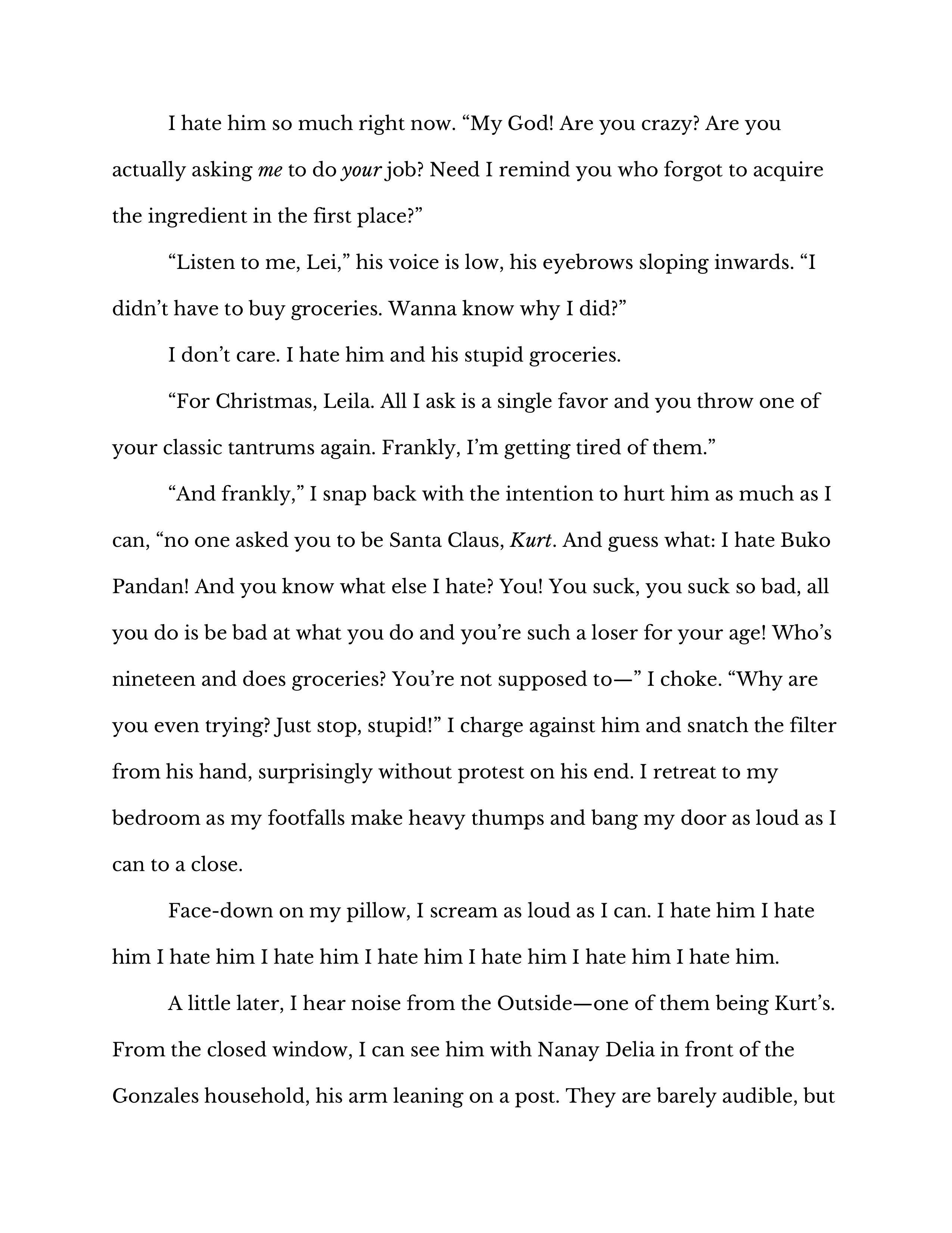 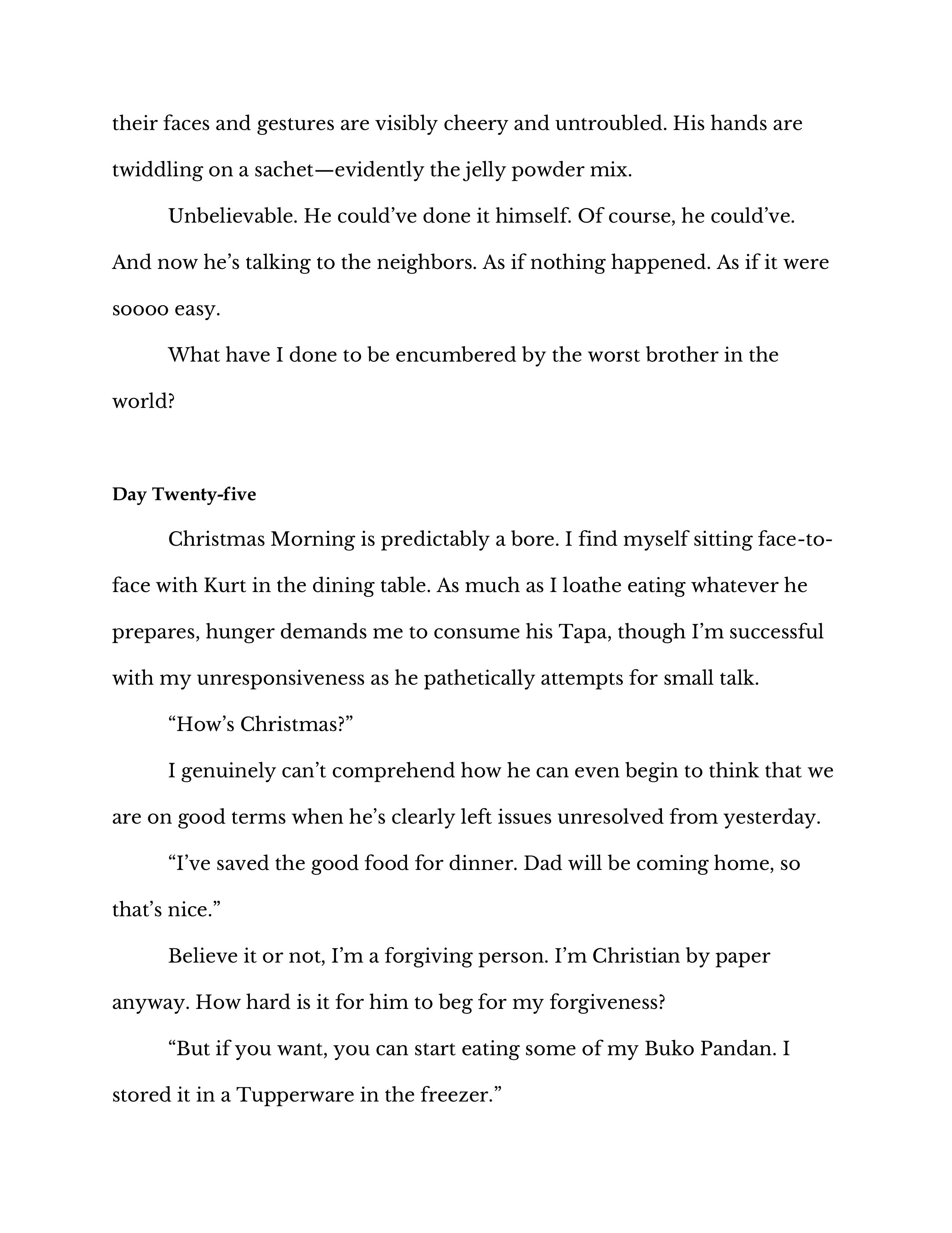 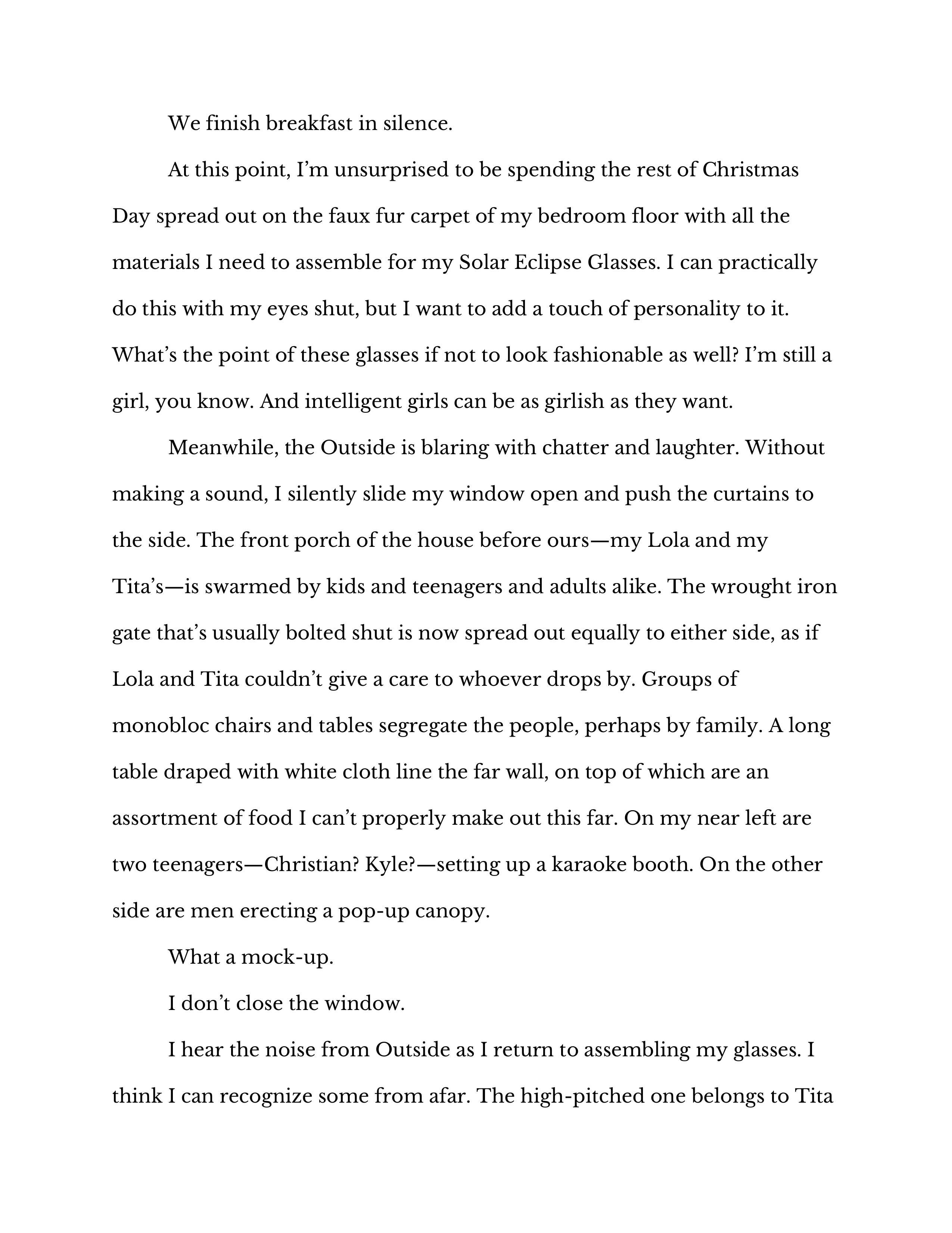 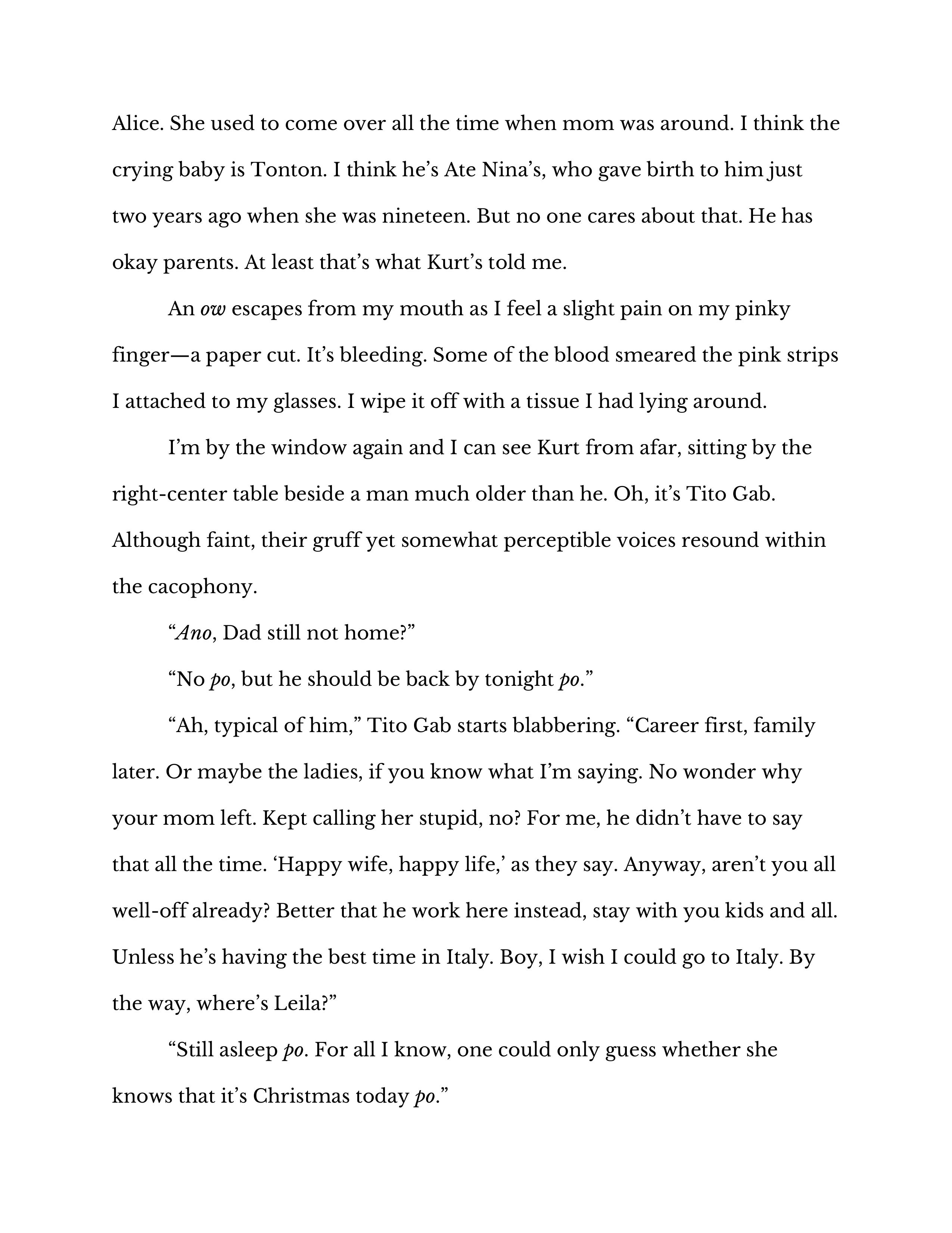 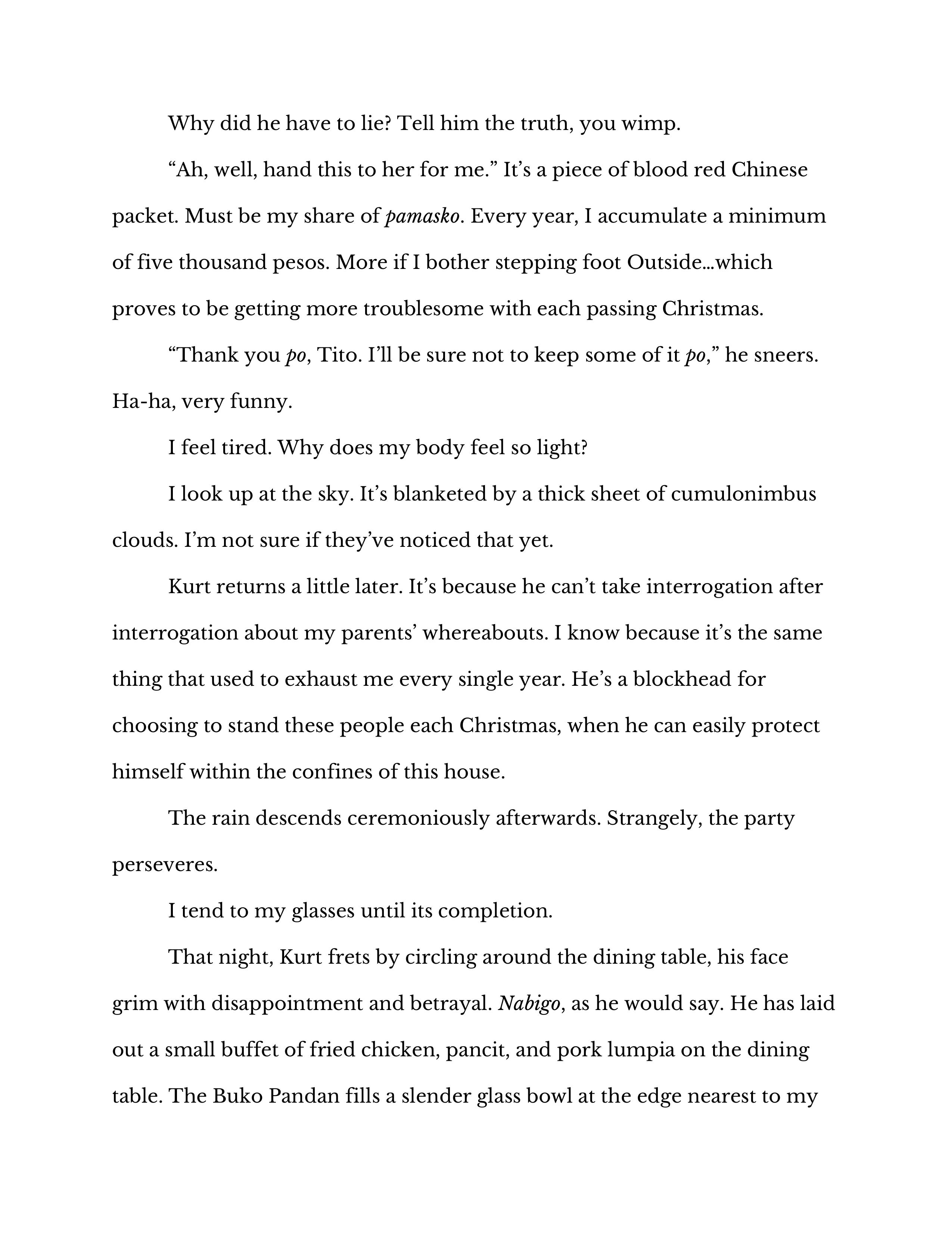 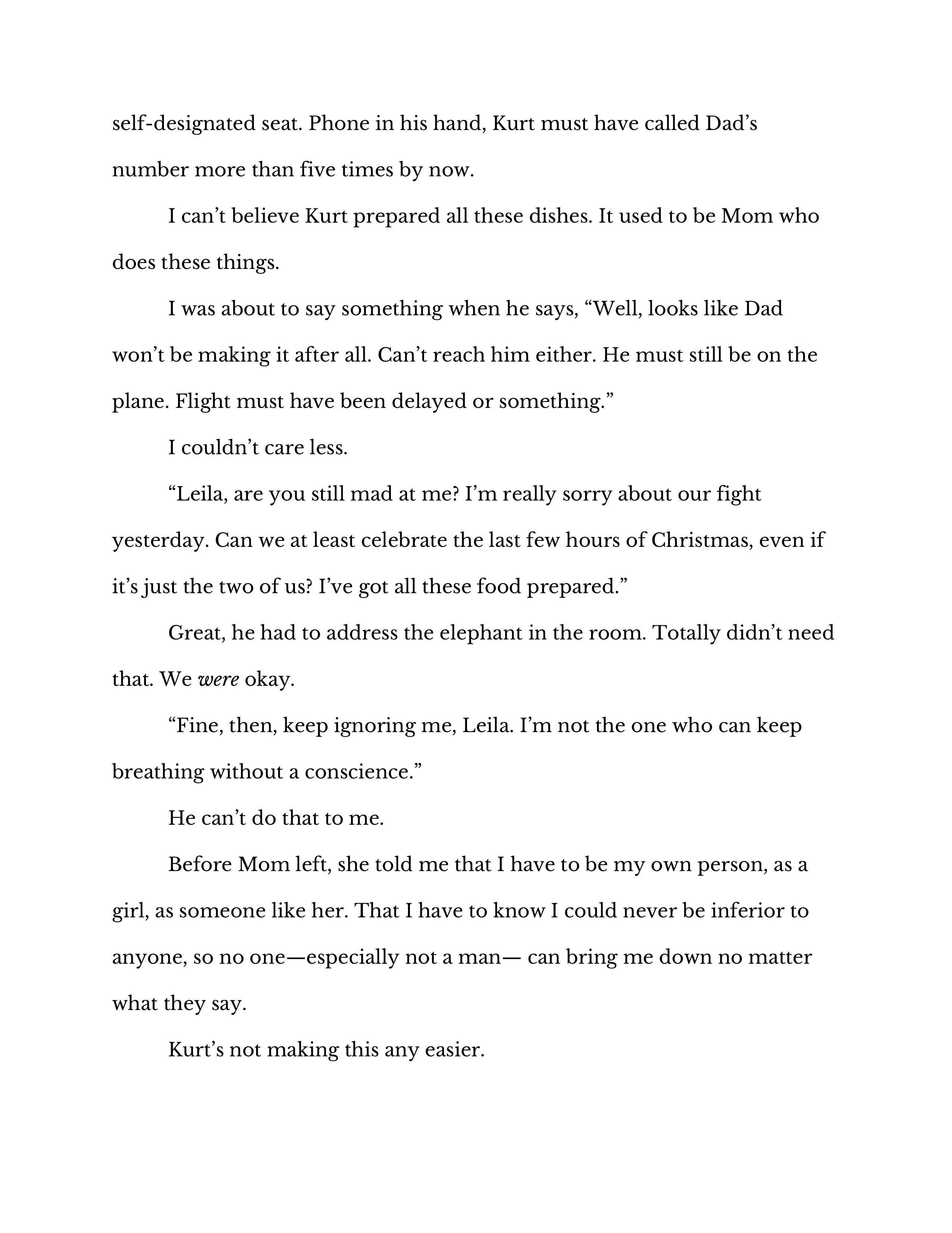 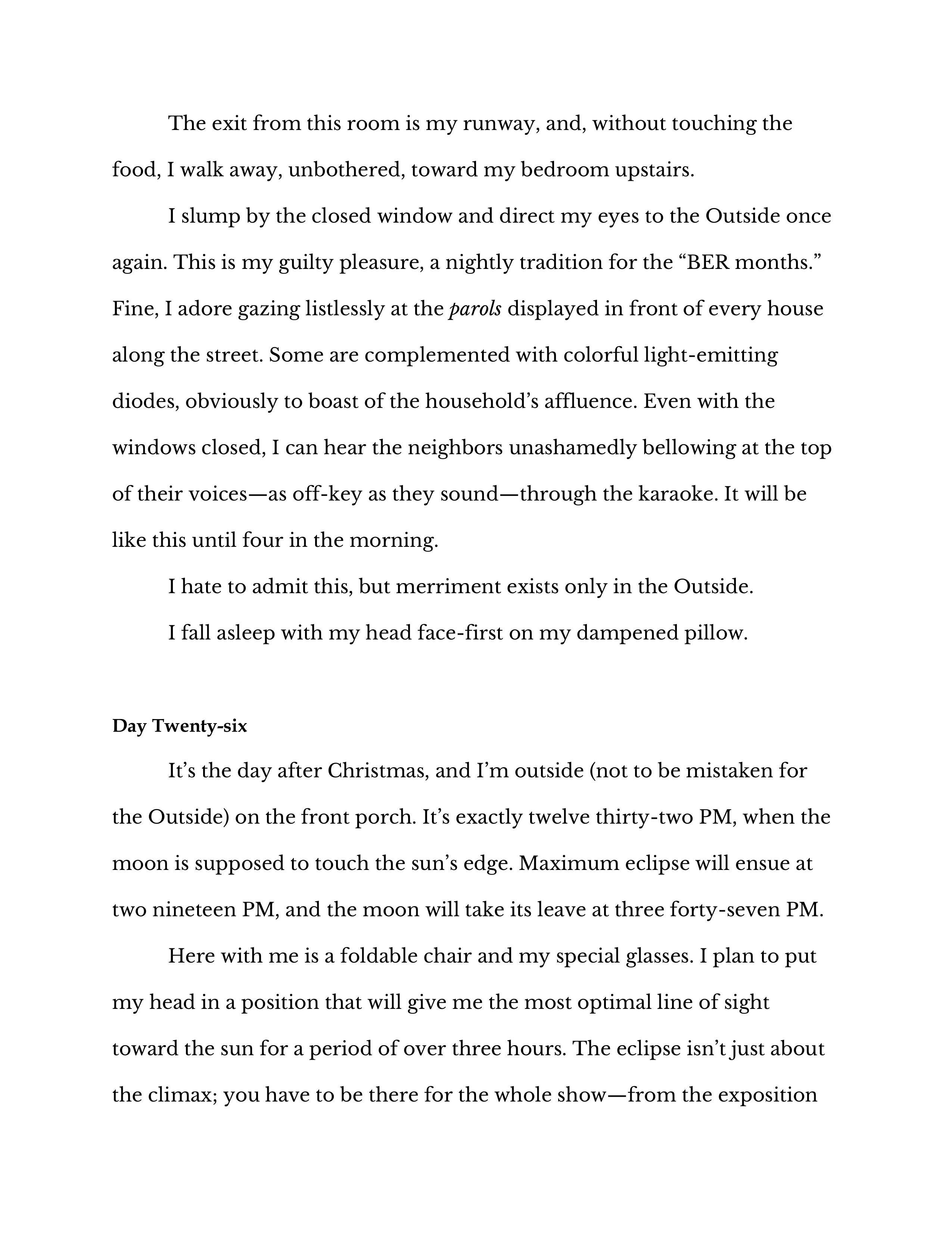 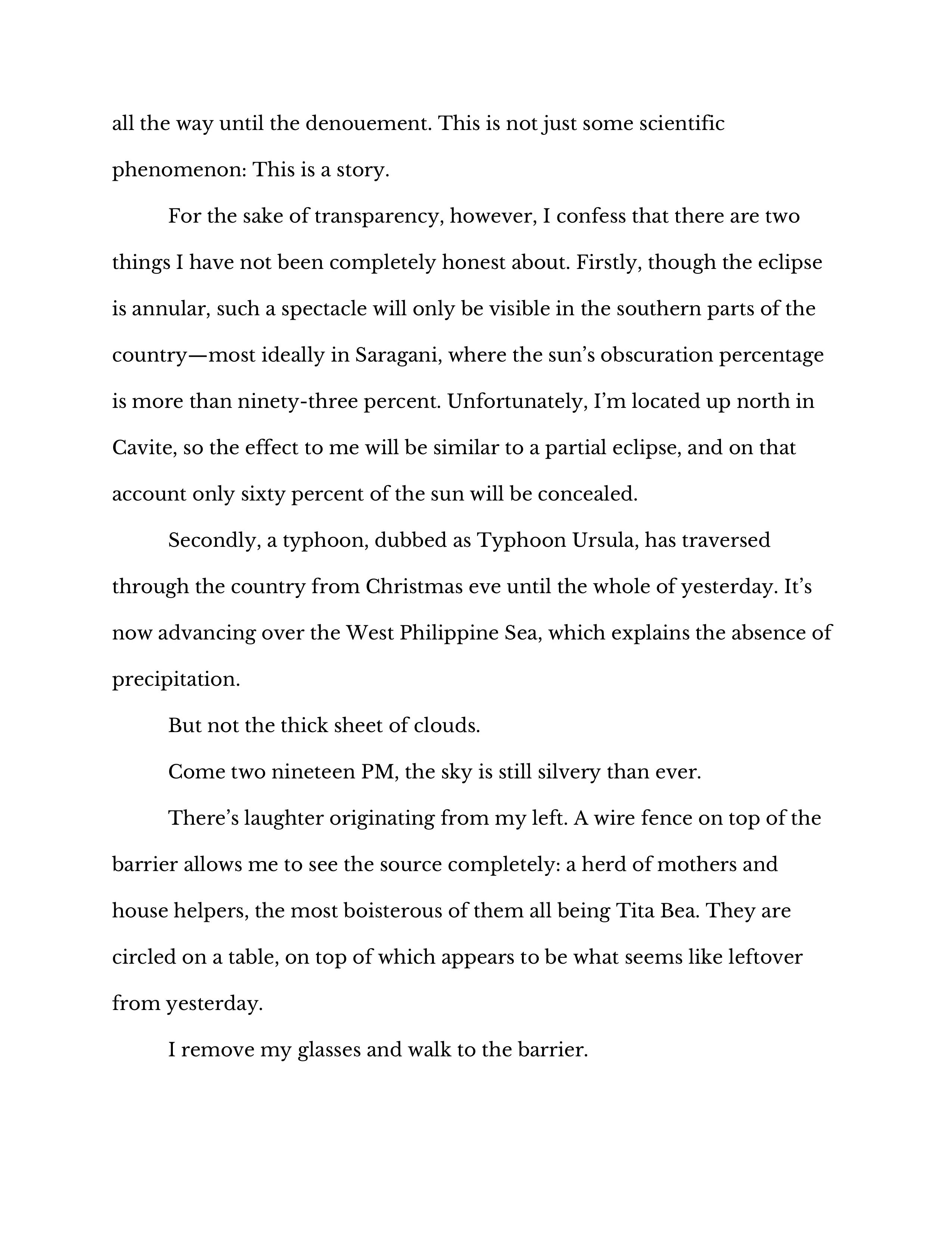 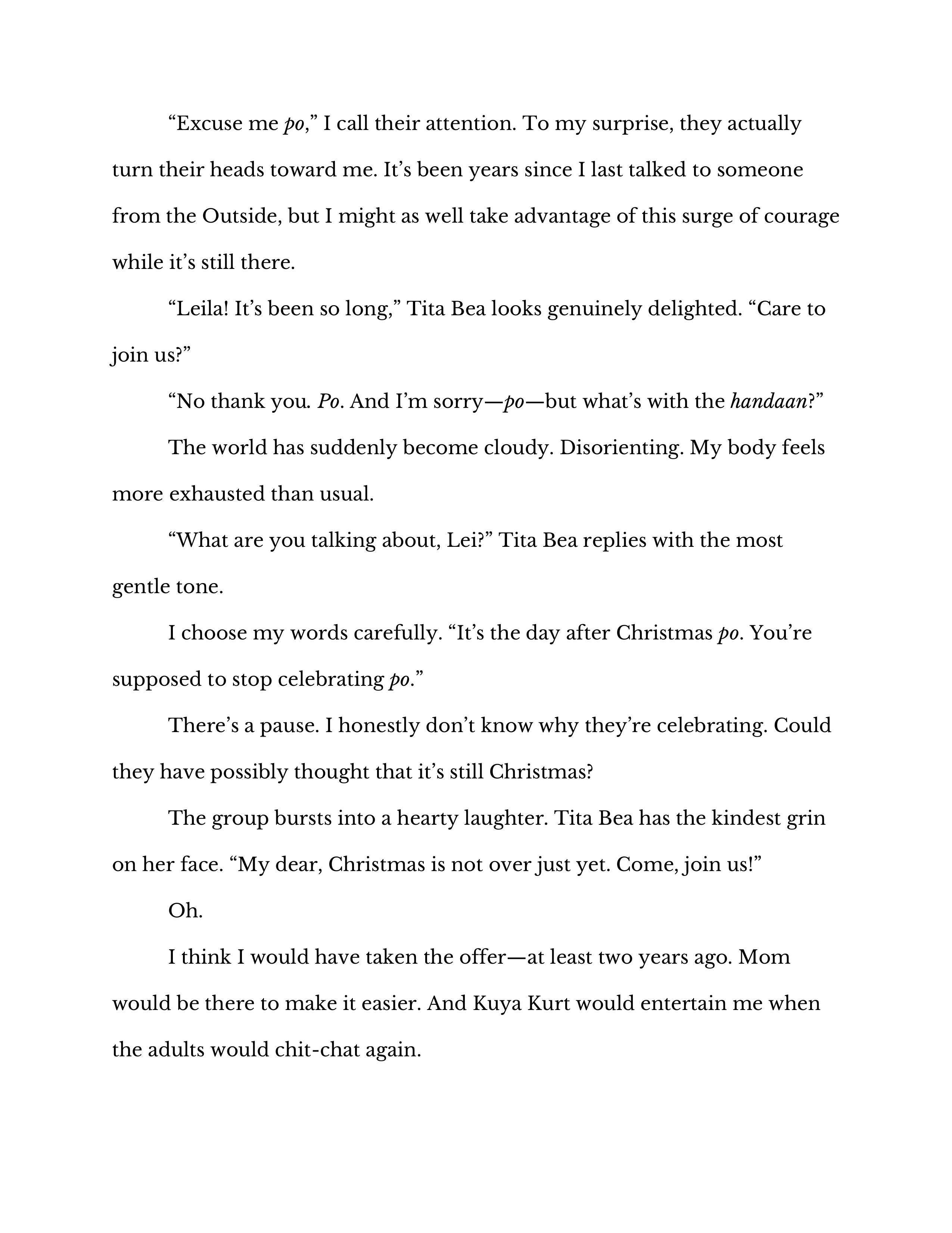 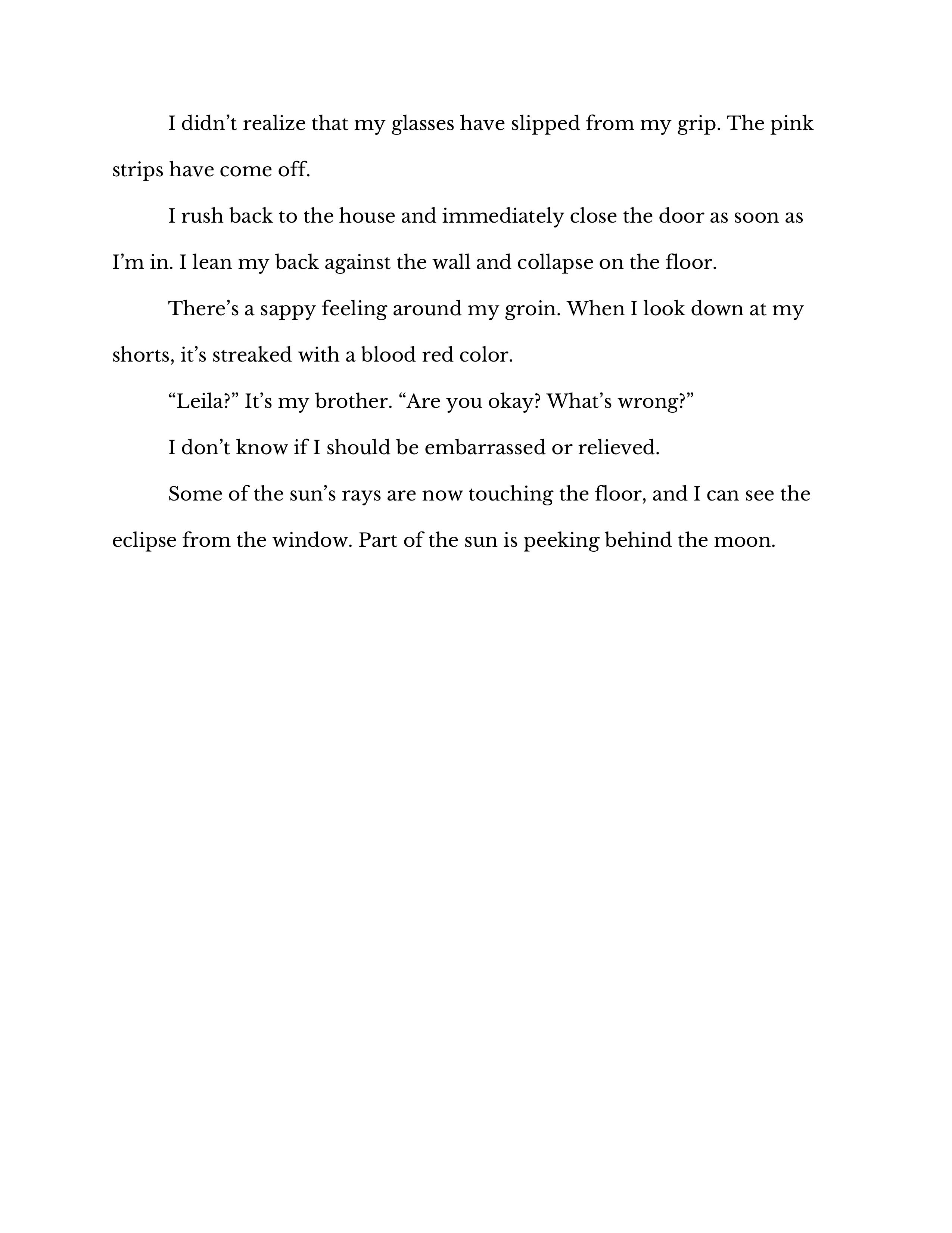 When I came into the workshop for my piece, my mentor, Ma’am Tin Lao, began the discussion by asking me two questions, both of which were related to my poetics in writing: First, why write fiction? Second, why write research-based fiction? I wasn’t made to answer these questions on the get-go—in fact, I was given a whole hour to think about them—but I caught myself dumbfounded. Later on, Ma’am Tin sent me a recording of her feedback on “Days of Sky” as a form of consultation. She gave the best tips in revising my work, but the one thing that stuck out to me was her comment on the way I approach storytelling in a cerebral fashion. Thinking about it further, I came to the realization that my mentor was right: I do put in a lot of effort in giving a rationale behind my stories, in using a framework to dramatize phenomena, or in letting data bleed into my imagination. I’ve always thought that writing was a purely creative activity, and so to hear my mentor validate my process was reassuring.

Research is oftentimes construed as highbrow or strictly confined to the walls of the academe, but what people don’t acknowledge is that everyone does research—albeit in different ways. The world is your data, and your construal is your framework. When I wrote “Days of Sky,” I fictionalized Leila and her worldview with Virgilio Enriquez’s legacy in mind. Dubbed as the “Ama ng Sikolohiyang Pilipino,” Enriquez realized an indigenous theoretical framework and methodology based on the historical and sociocultural realities of Filipinos. Enriquez’s influence is also made distinct in the work of Jesuit priest and anthropologist Albert Alejo, who is known for his study on the loob. With research, both Enriquez and Alejo guided my process in materializing “Days of Sky,” which became an exercise on Filipino psychology.

“Days of Sky” essentially borrows Enriquez’s and Alejo’s frameworks on pakikipagkapwa. As a core Filipino value, pakikipagkapwa is essential to the coming-of-age of a Filipino as a way of the self extending to and feeling for their surroundings. Before writing the story, I thought to myself: What exactly does pakikipagkapwa look like? Or better yet...what does an absence of pakikipagkapwa look like? If pakikipagkapwa is the “norm” in the Filipino context, what would that norm make of those who do not practice it? Could it be exclusive? Equally important, why could they not have pakikipagkapwa in the first place? The result is Leila, the main character of the story, who finds it difficult to find her place in her community. Because her childhood was riddled with patriarchal trauma, it was not only challenging for her to properly relate to her immediate family, Kurt, but also to her neighbors—and by extension, the rest of the world. This, in translation, compromises the loob-labas dialectic of Leila. But the character of Leila not only challenges the notion of pakikipagkapwa, but also partakes in it through the lens of an introvert, a child from a broken family, and a neurodivergent person. Pakikipagkapwa is part and parcel of socialization, but that does not mean it is one-dimensional, restrictive, or elusive. In reading Leila’s character, we see how pakikipagkapwa can be acquired and practiced differently, and that is something deserving of recognition. This, I think, would hopefully be my contribution to the body of knowledge developed by Enriquez, Alejo, and other sociologists.

I submitted to this workshop with the declaration that I was struggling with my craft. While I do have a niche in writing, I admit that I have difficulty with storytelling. “Days of Sky” is a form of research-based literature, but it falls short as fiction. Although the workshop has helped me resolve this, “Days of Sky” is far from finished—and it will probably never be so. The burden of writing is that it has no end; such is the caveat of any creative pursuit. Even so, I am glad to have applied what is generally considered as discursive to my artistic practice, and along the way I have discovered more about my sources, my writing, and myself and the world around me. That in itself is one of the best rewards for a writer, and so long as I continue to learn, I am confident that I will persist in writing.